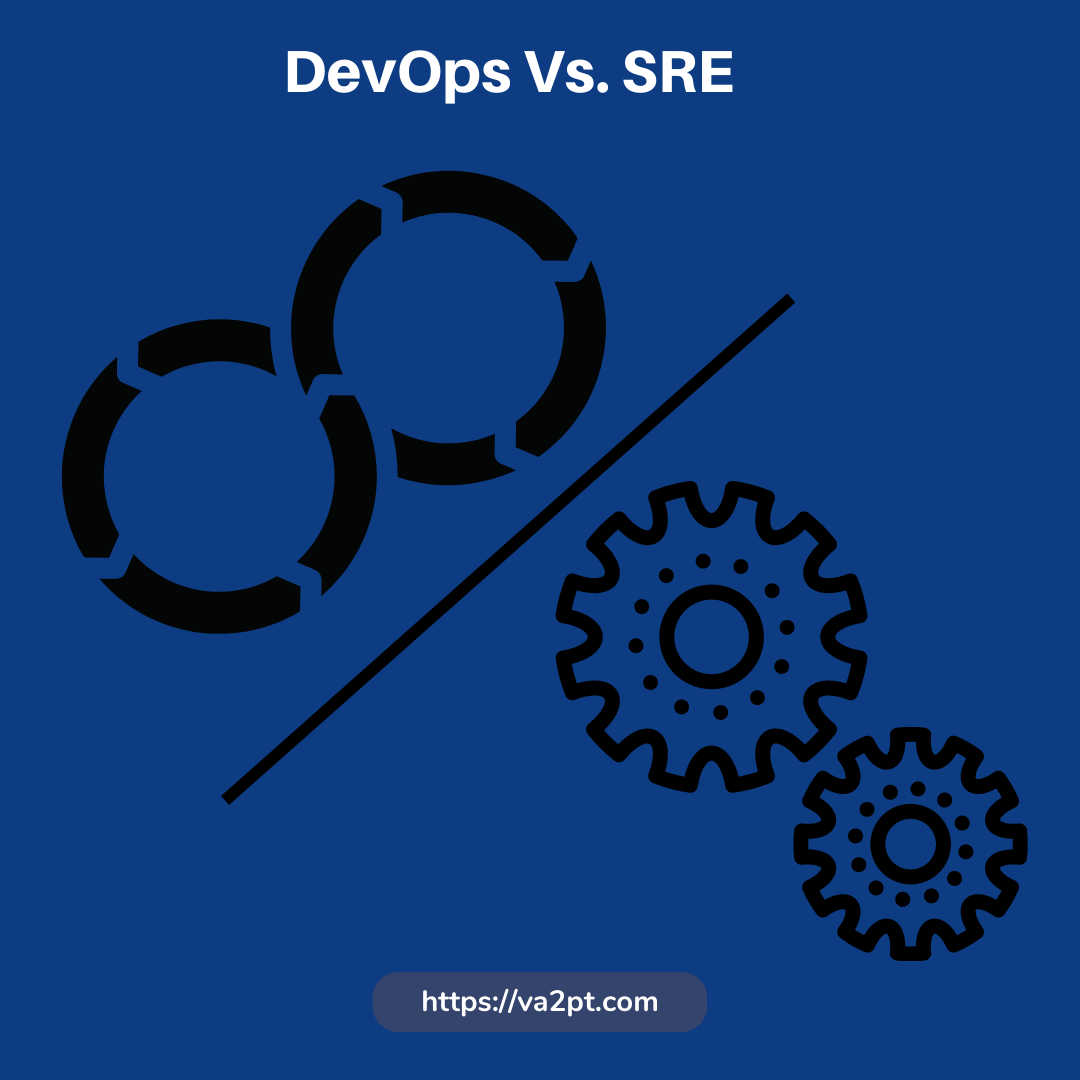 In DevOps or SRE, we will look at two different concepts and their depth. SRE and DevOps appear to be two sides of the same identical dice.

With the shared objective of improving the release cycle without making any concessions, both games seek to close the gap between development and operations teams.

Indeed, in most firms, we can see that just one of these professions is required, with some overlap in tasks and competencies. Both titles coexist in the exact same location and are critical development team members.

Before the implementation of DevOps, development and operations were two separate squads, each with its own set of aims and objectives.

The discrepancies and lack of communication between different teams frequently impacted the product, affecting end users and the firm.

DevOps is defined as “a software engineering culture and practice aimed at combining software development and software operations.”

” Andrew Shafer and Patrick Debois invented the phrase in 2008, and while it took a few years for it to become a mainstream notion, presently, almost every firm, from enterprises to startups, hires DevOps.

The notion of a Site Reliability Engineer (SRE) has been around since 2003, making it even older than DevOps. Ben Treynor, who founded Google’s Site Reliability Team, invented the term. SRE, according to Treynor, is “what happens when a software engineer is tasked with what used to be considered operations.”

SRE, like DevOps, is about bringing together development and operations teams, allowing them to see the other side of the process and providing visibility into the entire application lifecycle.

Both titles are proponents of automation and monitoring, with the same goal: to shorten the time between when a developer commits a patch and when it is sent to production.

DevOps and SREs seek to do so without sacrificing the quality of the code or product.

According to Google, SRE and DevOps are “not two competing methodologies for software development and operations, but rather close companions aimed at tearing through organizational barriers to produce better software faster.”

The Differences Between DevOps and SREs

As previously said, DevOps is all about mixing development and operations, defining system behavior, and determining what needs to be done to narrow the “gap” between the two teams.

The philosophy underlying this term discusses what needs to be done to get the two teams to operate together as one.

While DevOps focuses on the “What” that needs to be done, SRE focuses on the “How.” It is about extending the theoretical portion to an effective workflow, complete with the appropriate work methods, tools, and so on.

It’s also about sharing responsibility and getting everyone on the same page with the same purpose and vision.

While DevOps focuses on the “What” that needs to be done, SRE focuses on the “How.” It is about extending the theoretical portion to an effective workflow, complete with the appropriate work methods, tools, and so on.

It’s also about sharing responsibility and getting everyone on the same page with the same purpose and vision.

Large corporations typically have a complicated organizational structure with several teams working in silos. Each group is dragging the product in different directions, not interacting with the rest of the organization, and thus failing to understand the big picture.

This might result in irritation, a delay in deployment, and significant expenditures due to delays.

DevOps aims to break down silos and ensure that no teams within the organization are not aligned with the rest of the enterprise. They combine the teams into a single group with a common goal.

SREs don’t discuss how many silos exist in the firm but rather how to encourage everyone to talk about it.

This is accomplished by employing the same tools and methods throughout the organization, which in turn helps distribute ownership among all parties.

Accept failure as a given.

Although the objective of DevOps is to handle and cope with difficulties before they arise, failure is something we can’t avoid.

DevOps welcomes this by viewing failure as a natural occurrence that can help the team learn and improve.

This goal is accomplished in the world of SREs by using a formula to balance failures and accidents with new releases. To put it another way, SREs strive to prevent too many mistakes or losses, even if they teach us nothing.

SLIs compute request latency, the flow of requests per second, or errors per request as measured over time to determine the failures per request. SLOs produced from this threshold, percentage, or number show the success of SLIs over a given period.

DevOps favors this transformation, but only in a controlled and gradual manner. Both DevOps and SREs emphasize moving swiftly, with SREs placing a strong emphasis on lowering the cost of failure as they do so, as noted by Google.

As we’ve already mentioned, automation is a key focus area for both DevOps and SREs. Both books promote the use of as many tools and automation as feasible as long as doing so benefits operations and development by doing away with manual chores.

Everything should be measured.

A fast-moving automated workflow necessitates regular monitoring. DevOps and SRE teams must ensure they are heading in the right direction, which they accomplish by measuring everything.

The primary distinction here is that SREs are based on the idea that operations are a software problem. This has led them to establish prescriptive methods for monitoring availability, uptime, outages, toil, etc.

SREs also ensure that everyone in the organization understands how to measure reliability and what to do if availability falls short of expectations. This comprises contributors at all levels, from coders to team managers to vice presidents and CEOs.

What Exactly Does It Mean to Be Dependable?

We discussed accountability, admitting failure, and measuring everything. Now we need a technique to ensure everything is working correctly and reliably. In other words, there should be a standardized approach for measuring reliability at all levels.

SREs track SLIs and SLOs, while DevOps teams track failure and success rates over time, and they do so using different tools and approaches.

While these teams generally understand what is happening, it is not complete. Reliability is not just about infrastructure; it is essential at every stage, from application quality to performance to security.

Failures and issues can and will occur in all program elements, and when they do, we need reliable data to understand what led to the point.

And, because this is critical information, we must ensure that it is credible and actionable. This can be accomplished by setting up alarms for various circumstances, embracing a peer code review technique, unit tests, and so on.

While these strategies encourage everyone to share responsibility, they may impact the product’s performance.

And the higher the cost of failure, whether it’s customer happiness, employee churn, or diminished product value, the larger the organization.

That is why it is critical to reduce manual system work and automate data collection. While you’re at it, you should also keep track of everything that’s going on with your product.

To put it another way, you need the necessary data to assess the dependability of your program across the CI/CD workflow.